She was bought as a replacement when Gordon was in the works. After she met Thomas and Eric, She then recognize Henry and talked with him as she knows him, but James made fun of them. She is really kind with everyone and did work with a smile. She was surprised when Toby spoke Spanish, when she asked Toby, before he could answer Mr. Star showed up.

Alice is kind, kindhearted and always keen to help a friend in need. She can pull her own weight unlike her siblings in London.

Alice is based on the large-boiler variant of the GNR Class C1 #251, built in 1902. This is the only engine of its kind to be preserved. 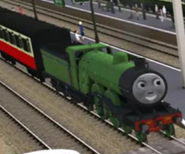