"Hello, I'm Eric, you must be Thomas. Well nice to meet you!"
— Eric introducing himself, Goods

Eric is a goods tank engine for the LNER, later serving for their Sudrian Division, and then briefly for the North Western Railway, and he is currently working for British Railways. He is an LNER V3 Tank Engine.

He made an amiable goods engine, delivering heavy loads with little to no trouble. But he did prove very absent-minded. One instance of his inattentiveness caused a great deal of trouble for the railway.

In Branch Lines, while speaking to Edward, he negligently left a goods train in the middle of the line which Henry almost crashed banged into, giving him flat tyres on his wheels. He had to act as Henry's replacement for while Henry was at The Works. Mr Star who was furious with Eric put him on probation, with the promise that he would be sent away at the slightest transgression.

Eric continued to work in fear of Mr. Star, until Thomas' safety valve burst in while he was rushing to the hospital as Carlos Calindas' wife was pregnant. Eric was passing by to collect a goods train at Calden, and Thomas begged him to help. Eric was reluctant, but when he realised there was a pregnant woman aboard, he promised to help, resolving not to work for Mr. Star anymore if he gave him grief. The Calindases gave birth to their son at Elsbridge thanks to the selfish actions of Stationmaster Jeffries. He was named Thomas Eric Calindas after the two engines who helped his parents.

Instead of being punished for the events, Mr. Star took him off probation and put him in charge of rebuilding Knapford Harbor in Scrap, as a reward for his heroic actions.

Eric is a dim-witted yet kind, optimistic and happy chap but sometimes his dim-wittedness can lead to problems and accidents.

Eric is painted in LNER Apple Green livery and red linings with the number 12 painted on his tanks. He has Black wheels.

Eric is based on the LNER V3 Locomotive of related 2-6-2T steam locomotive designed by Sir Nigel Gresley. A total of 82 V1s were built with 71 being rebuilt into the higher pressure V3s with an additional ten being built as V3s from the final batch of V1s. The V3 was a development of the V1 with increased boiler pressure and a resultant increase in tractive effort. None have survived into preservation. However a non profit organization called the A1 steam locomotive trust will start building an operational V3 replica once they are finished with a V4 replica. 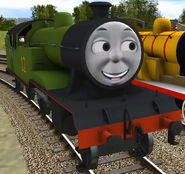 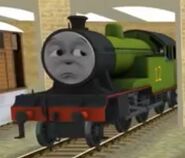 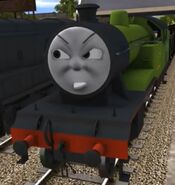 Retrieved from "https://stories-of-sodor.fandom.com/wiki/Eric?oldid=18613"
Community content is available under CC-BY-SA unless otherwise noted.