The Furness Railway was a company operating in the Furness area of Lancashire in North West England. The Railway was operation from 1844 to 1907. Its Successor was the LMS. It was the home of Edward before he came to Island of Sodor.

In the early 1840s, the owners of iron ore mines in the Furness district of Lancashire became interested in a waggonway from their mines to Barrow; the project was adopted and expanded by the Duke of Buccleuch and the Earl of Burlington. Advertisements in 1843 announced a scheme, supported by their Lordships, for a Furness Railway to link Ulverston 'the capital of the district', iron ore mines (at Dalton-in-Furness) and slate mines (at Kirkby-in-Furness) with the coast at Barrow harbour and at Piel pier . Traffic on the line would be horse-drawn, but the line was to be laid out to allow easy conversion to the use of steam power. A survey had already been carried out by James Walker. "The primary object of this undertaking" explained a subsequent advertisement "is to improve the present very dilatory provision for the transport of the valuable Mineral products of Furness and adjoining Districts to the Coast"[4] but it was noted from the start that much of the line would form part of any coastal route north from Lancaster.

The Kirkby branch was extended to Broughton, passing inspection for passenger traffic at the end of February 1848; when a Broughton to Barrow train was derailed by mis-set points in July 1849, it was noted that "nearly all the gates and points on the Furness line are attended by women" and that a woman had the management of the points which had been mis-set. The Dalton branch was extended to Lindal (goods traffic running from mines there from early May 1851) and then on to Ulverston , eight waggons of coal being delivered there from Whitehaven in April 1854, even before the station was complete; passenger services began in June 1854, In 1854, 330,000 tons of iron ore travelled over the railway (as against 225,000 tons the previous year), other goods traffic was up from 22,000 tons in 1853 to 40,000 tons, and there were 145,000 passenger movements (95,000 in 1853); the company declared a dividend at a rate of 6% a year.

In 1863, in conjunction with the Midland Railway, the FR promoted a Bill for the Furness and Midland Joint Railway between Wennington and Carnforth; the intention was said to be to give a more direct connection between the iron ore of Furness and Yorkshire ironworks and coal-mines. The London and North Western Railway cast doubt on this, pointing out that Furness got its metallurgical coke from South Durham over the Stainmore line and exported most of its ore to districts better served by the LNWR, but withdrew its objection on being offered the same powers as the Midland over the FR. The F&MJR opened for passenger traffic 6 June 1867; it was worked by the Midland. In 1867 the FR secured an Act for the construction of the Hincaster Branch from Arnside to the Lancaster and Carlisle Railway at Hincaster. This single-track line was intended to shorten the distance to Barrow for the coke traffic over Stainmore. In 1870, the FR brought forward, and then abandoned, a Bill authorising abandonment of the project.

The Furness Railway bought an engine named Winston. Albert was also bought as a shunter. on 1891, The Sharp, Stewart and Company built the FR K2 locomotives. One of them was named 'Edward', Edward spent his early life as passenger engine for the Furness Railway. together with his colleagues (Albert and Winston) they ran a fast efficient operation on the FR. But despite there best effort, The Furness Railway was closed down due to number of incidents, some which is real serious then others. Edward was sold to Sodor while Albert was sent to the London, Brighton and South Coast Railway, and Winston was sold to the Great Eastern Railway. Nowadays, the Furness Railway is preserved for holiday and tourist rides and ran by locomotive No. 20. 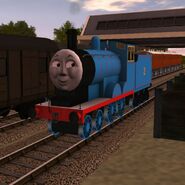 Albert
Add a photo to this gallery

Other engines have other classes - see here

Retrieved from "https://stories-of-sodor.fandom.com/wiki/Furness_Railway?oldid=18622"
Community content is available under CC-BY-SA unless otherwise noted.