"Reginald came next in 1924 followed by Henry and then James..."
— Edward, A History of its Railways

James is the Nor' Easter's number 5. He is a mixed traffic engine, meaning he is good at pulling both goods & passengers.

James used to work on the Lancashire and Yorkshire Railway and worked on its eastern division with his partner Amanda. They were both Mixed-Traffic Engines so they were both kept plenty busy. One of their regular jobs was to deliver shipments from a Factory near their line. One day they were both assigned to handle a large delivery which included some Gun Batteries, the job was going well enough when James had to shunt one them, and Amanda was near it, James slowly bumped the Rail Gun and it fired. James later woke up at a Works and his manager told him that the Factory was destroyed, 43 people passed away and Amanda was Scrapped. On 1924, James arrived on the Island of Sodor to work in the London and North Eastern Railway.

James made fun of Douglas because of his accident at Tidmouth but after James crashed into some TAR Tankers near Maron and ever since He and Douglas didn't got very well together, whenever something happens to one of them the other make fun of him. Until James wanted help from Douglas that day to give him a push up Gordon's hill but Douglas accidentally smashed Dominick and Micky asked James some questions. One day, on 1938 James was talking to Edward when an engine named Molly with Gun Batteries which remained James about his past but Edward teased him about it until James told his past story to Percy, Gordon and Diesel. His past story spread all around the island and the outpouring of support James received from other engines, Not'easters or Midi's was phenomenal. He very appreciated it.

He, Edward, Toby, Diesel and Wendell later went to investigate the mystery of the Peckett on The Black Bridge, after passing the bridge he was blown up by the The Evil Duck.

James is very proud of his splendid red paintwork. He dislikes pulling trucks and believes that he should only pull coaches. He thinks himself superior to the others and can be shallow, boastful, overconfident, naughty, and vain, particularly to Midi's. However, on a number of occasions, he has found himself in need of help from those whom he has insulted and is, in the end, apologetic.

James is based on the L&YR Class 28, a class of 0-6-0 mixed-traffic tender locomotive designed by George Hughes for the Lancashire and Yorkshire Railway and built by Horwich Works between 1909 and 1912. It was a rebuild of Aspinall's Class 27, with the addition of a Belpaire firebox, a Schmidt/"twin-plug" superheater, and the extension of the footplate and front sandboxes. 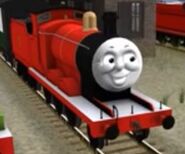