LMS Green
Reginald is a express engine for the London, Midland and Scottish Railway on Sodor. Reginald arrived to Sodor in 1924. His top speed is 60 mph.

Reginald is a LMS Patriot number 45511. He first appeared in Season 1 Episode 1 as a cameo. His first speaking role was in Season 1 Episode 4 when he was depicted as Gordon's rival. After Gordon arrived late at Barrow, Reginald burst his safety valve and Gordon delivered his passengers to Knapford.

Reginald first arrived in sometime after 1924.

After Gordon arrived late at Barrow, Reginald burst his safety valve and Gordon delivered his passengers to Knapford.

After Gordon burst his cylinder value on his hill, Reginald took his passengers which made their rivalry even stronger.

He is painted LMS black livery with Red linings.

According to WildNorWester, Reginald is based on Isle of Man a real engine who has the number 45511, type LMS patriot class. Victor Tanzig renamed him to Reginald 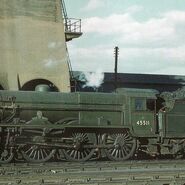 The engine that Reginald is based on.